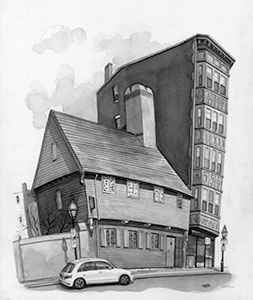 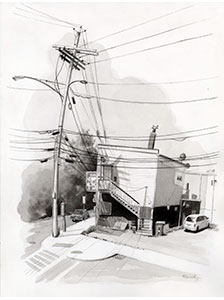 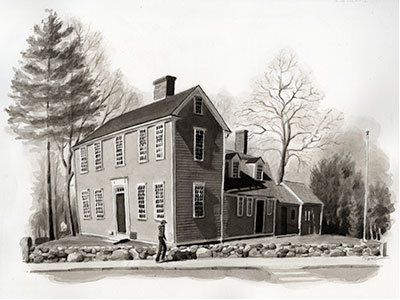 The Hancock-Clark House, Lexington, 2012, Fred Lynch, Ink on paper, Loaned by the artist.

“Paul Revere’s Ride Revisited: Drawings by Fred Lynch,” a new exhibition now on view at the Scottish Rite Masonic Museum & Library, provides a fresh perspective on Paul Revere’s famous ride. This exhibition features 19 drawings by artist Fred Lynch, accompanied by his written impressions. Fred Lynch’s drawings of landmarks—both celebrated and lesser known—show how much has changed since Revere’s time, even as echoes of his era remain. The exhibition is on view through March 7, 2020.

Americans recognize Revere’s now-famous warnings: “The British are coming” or “The Regulars are out.” The story of Revere’s ride is over 200 years old, and its place in the early days of the American Revolution is well understood. For many, however, the details of Revere’s ride are left to their imagination. Fred Lynch’s drawings fill some of the gaps. His visual and written impressions provide viewers with an opportunity to consider how the scenes and buildings along Revere’s path have changed. Fred Lynch resides in the Boston area and is an artist, illustrator, and professor of Illustration at the Rhode Island School of Design.

“Paul Revere’s Ride Revisited” illustrates this evolution within a modernizing metropolis. In one of the more harrowing experiences of his journey, Revere was forced to divert course to narrowly avoid capture by British officers. Today, the location sits across from a pizza shop, represented in Lynch’s drawing “Royal Pizza & Subs” in Somerville, MA. The site of a perilous moment in Revere’s story is now shown as a peaceful suburb, far removed from the urgency of Revere’s ride. 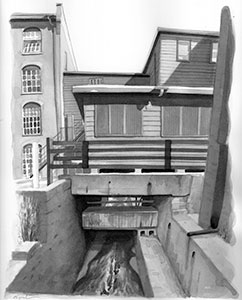 While time has changed much along Revere’s route, some landmarks have been preserved. The drawing, “Munroe Tavern,” shows a well-maintained building in snowy Lexington, MA. The building has long been seen as an important landmark and a reminder of the events that took place on April 19, 1775. The tavern currently operates as a museum, on the day of the battles in Lexington and Concord it served as a makeshift field hospital and, in 1789, hosted George Washington when he came to pay visit to the battlefield.

The starting point of Revere’s ride was, of course, his own home. In his drawing, “The Paul Revere House,” Lynch captures the oldest house in downtown Boston—constructed in 1680—behind a modern car, representing the past and present. The building changed hands for years until 1902, when Paul Revere’s great-grandson purchased it. The house was restored with the purpose of turning it into a museum, as it is today.

“Paul Revere’s Ride Revisited” traverses Paul Revere’s famous route, underscoring some of what has been preserved, as well as a lot what would be unrecognizable to colonists. Lynch explores this dynamic in a visual essay that talks about Revere’s journey from Boston to Lincoln in a new way.