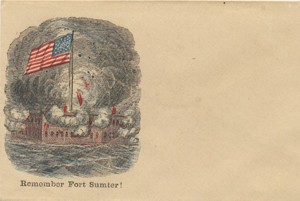 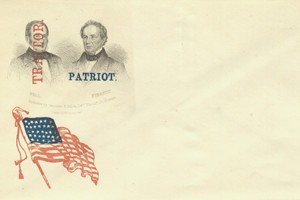 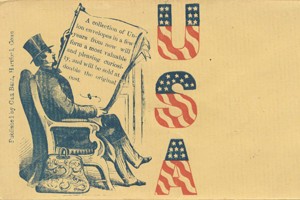 Illustrated Patriotic Envelopes of the American Civil War
Through December 1, 2018
On view in the reading room of the Van Gorden-Williams Library & Archives at the Scottish Rite Masonic Museum & Library

Following the November 1860 election of Abraham Lincoln (1809-1865) as President of the United States, seven states in which slavery was legal individually seceded from the Union. They did so because of Lincoln’s opposition to the expansion of slavery in the western United States. South Carolina, Mississippi, Florida, Alabama, Georgia, Louisiana, and Texas declared themselves the Confederate States of America (C.S.A.), and established a capital first in Montgomery, Alabama and then in Richmond, Virginia. After the Confederate attack on Fort Sumter in South Carolina in April 1861, four more slave-holding states joined the Confederacy. The C.S.A. was never officially recognized by the United States or any foreign government. The American Civil War, fought between the Union and the Confederate South, lasted until 1865. Casualties on both sides, from death, disease, and wounds, totaled over one million.

Shortly after the war began, publishers began printing illustrated envelopes (also known as covers) related to the war. The designs treated a variety of subjects, such as soldiers, battles, and patriotism. Publishers released 3,000-4,000 individual Union designs and no more than 160 individual Confederate designs of this form of wartime propaganda. Americans quickly began collecting these envelopes and, as early as 1861, manufacturers marketed album