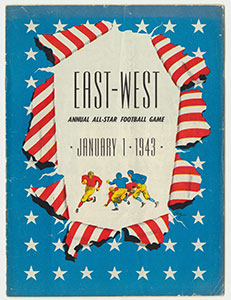 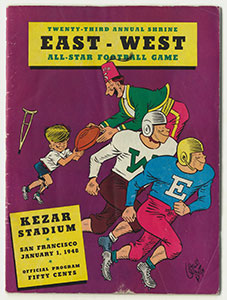 Since 1925, the Shriners have sponsored the annual all-star East-West Shrine football game, a tradition that continues today. Two teams, one comprised of football players from colleges in the Eastern U.S. and the other with players from the West, meet in January to compete. This program for the 1943 game, played during World War II, features a patriotic red-white-and blue cover. In contrast, Wiley Smith (1906-1994) illustrated the 1948 cover in a whimsical style reminiscent of his “Football Follies” comic strip.

Recent Acquisitions at the Van Gorden-Williams Library & Archives
On view now through June 1, 2019

The Van Gorden-Williams Library & Archives is one of the premiere repositories in the United States for the study of Freemasonry and fraternalism. The Library & Archives holds comprehensive collections on the subject of American Freemasonry, as well as other fraternal organizations, such as the Independent Order of Odd Fellows and the Knights of Pythias. We also collect material on various subjects in American history, including the American Revolution, decorative arts, material culture, and other topics which serve to provide broader context for the Masonic and fraternal collections.

The Supreme Council of the Scottish Rite of Freemasonry for the Northern Masonic Jurisdiction first took steps to form a library in 1887, when Hosmer A. Johnson, 33° (1822-1891) and Samuel Crocker Lawrence, 33° (1832-1911) each donated a large number of valuable manuscripts, documents and proceedings to the Council. In 1975, when the Supreme Council established the Scottish Rite Masonic Museum & Library, its library formed the nucleus of the Van Gorden-Williams Library & Archives. Since its inception, the Library & Archives has continued to acquire items—from unique manuscripts to the latest scholarship on fraternalism—through purchases and donations. The objects on view here are a selection of recent acquisitions.

The Library & Archives encourages both serious and casual researchers to consult its holdings to learn more about Freemasonry and American history. Here you can also explore the wide variety of fraternal groups that have been part of our national story, and the role that Masonic and fraternal organizations have played—and continue to play—in American life.

If you have a question about our collections or would like to discuss a donation of books or archival materials to the Library & Archives, please get in touch at [email protected]. 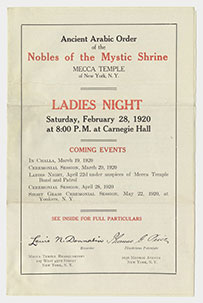 This pamphlet advertises a February 28, 1920 concert at Carnegie Hall presented exclusively for members of the Mecca Temple Shriners and their female guests. The concert featured Mecca Temple’s own band, along with “some of the most popular phonograph celebrities of the day.” Vernon Dalhart (1883-1948), who arranged the concert, was a member of Mecca Temple and a popular performer himself. In 1924, Dalhart recorded the first country song to sell more than one million copies.