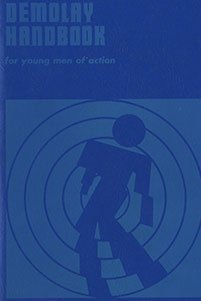 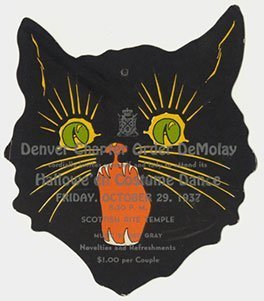 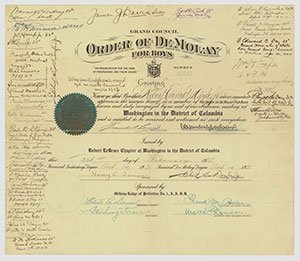 In 1919, Frank S. Land (1890-1959) founded DeMolay in Kansas City, Missouri. The organization, named after Jacques de Molay (ca. 1243-1314), the last Grand Master of the historical Knights Templar, initially admitted boys aged 16 to 21. Frank A. Marshall (1865-1931), Land’s friend and a fellow Mason, wrote the ritual for the organization’s two initiation degrees. The second of these focuses on the historical de Molay and emphasizes “fidelity and comradeship.” Social events such as formal dances organized by chapters are an important part of the DeMolay experience.

Over its one hundred year history, DeMolay has provided its members a number of different ways to participate. Chapters award merit bars in recognition of a DeMolay member’s various achievements, ranging from perfect attendance at Chapter meetings to community service. Starting in 1963, DeMolay began hosting a Leadership Camp, which aimed to allow attendees to “improve or develop their leadership abilities and generally acquire a greater knowledge of administration and utilizing DeMolay programs.” The 1980 DeMolay handbook offered guidance on everything from conducting meetings to planning social events. According to the handbook, dances, including costumed ones for Halloween, “will be the most common social affair planned by a Chapter.”

In 1969, DeMolay celebrated its fiftieth anniversary. Its membership magazine, Cordon, covered the anniversary celebrations in a number of articles over several issues. For each of the major DeMolay anniversaries—the 50th, 75th, and 100th—as well as regional and chapter-level anniversaries, members could purchase or earn a variety of medals and keepsakes, including keychains, pins, and patches. In the last quarter of the twentieth century, DeMolay members and chapters could purchase not only regalia and supplies needed to run their chapter, but also shirts, jackets, stickers, and other items that would allow them to show others their DeMolay pride. In the twenty-first century, the organization continued publishing a membership magazine, DeMolay News, that, in the issue on display in the Library & Archives, highlighted Swagger, an all-DeMolay rock band.

The Library & Archives encourages both serious and casual researchers to consult its holdings to learn more about Freemasonry and American history. Here you can also explore the wide variety of fraternal groups that have been part of our national story, and the role that Masonic and fraternal organizations have played—and continue to play—in American life.

If you have a question about our collections or would like to discuss a donation of books or archival materials to the Library & Archives, please get in touch at library@srmml.org.