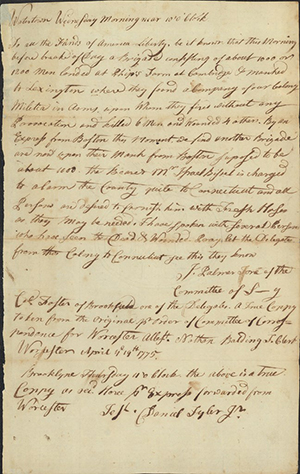 Each year at the time of the Massachusetts Patriots’ Day holiday, the museum is proud to display the Lexington Alarm letter—one of the documents used to notify the colonies south of Massachusetts that war had begun. The letter will be on view April 4-25, 2020.

Couriers delivered the news of the conflict at Lexington throughout the colonies soon after the event. This alarm letter was written by Joseph Palmer, a member of the Committee of Safety in Watertown, a town near Lexington. Recipients duplicated Palmer’s letter several times to carry the news far and wide. Daniel Tyler, Jr. of Connecticut penned the museum’s copy of Palmer’s letter, probably on April 20, 1775. The original Alarm Letter written by Palmer at Watertown is thought to be lost.

What makes this hand-written document such an exciting piece of American history is the urgency with which it was written. As we read the text, we can sense the shock and concern of its author, Joseph Palmer. It reads:

To all the Friends of American Liberty, be it known that this Morning before breake of Day a Brigade consisting of about 1000 or 1200 Men landed at [David] Phip’s Farm at Cambridge & marched to Lexington where they found a Company of our Colony Militia in Arms, upon Whom they fired without any Provocation and killed 6 Men and Wounded 4 others. By an Express from Boston this Moment, we find another Brigade are now upon their march from Boston supposed to be about 1000. […]

I have spoken with Several Persons who have seen the Dead & Wounded. Pray let the Delegates from this Colony to Connecticut see this they know.

Palmer wrote the letter 10 a.m., only one half-hour after the skirmish at Concord’s North Bridge. The encounter between Lexington’s militia under Capt. John Parker and the force of 700 or so Regular Army soldiers sent out from Boston was much earlier, at around 4:30 a.m. Palmer had spoken to witnesses of the destruction at Lexington and fears that more unprovoked attacks are to come from the second brigade he learned is on its way from Boston. His letter spreads the news of unfolding events, the outcome of which he does not yet know.