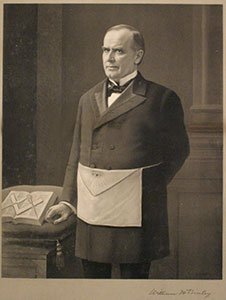 William McKinley: President and Freemason
On view now through September 2020

William McKinley (1843-1901), the 25th president of the United States, was born on January 29, 1843, in Niles, Ohio. At the age of 58, shortly after being re-elected to his second presidential term, he was shot in the chest and abdomen at close range while attending the Buffalo Pan-American Exposition in Buffalo, New York. Gangrene set into his wound and he died September 14, 1901, eight days after being shot.

The Scottish Rite Masonic Museum & Library recently acquired a collection of nearly fifty campaign and memorial items related to President and Freemason William McKinley (1843-1901). These items add to the many objects already in the collection associated to McKinley’s involvement in Freemasonry, his campaigns, and his unexpected death. Several of these items are currently on view in the Recent Acquisitions exhibition through September 2020.